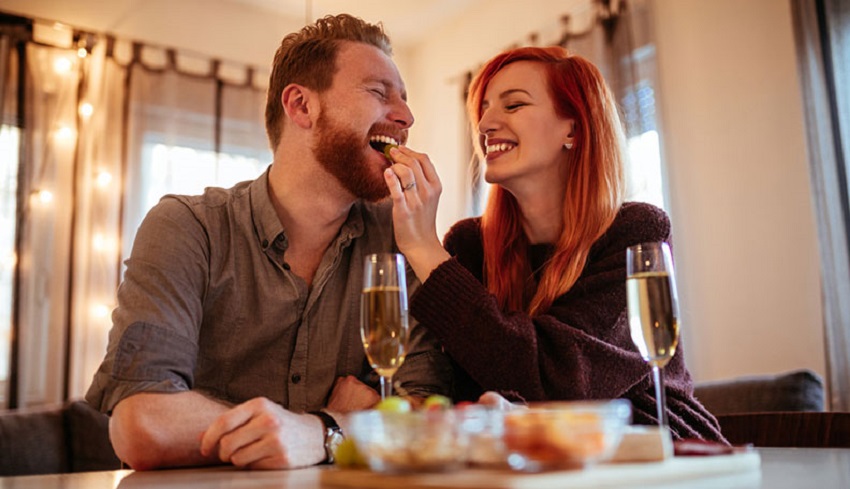 The weekend is coming and you and your partner have stayed, but you still don’t have a plan. Or maybe you already share a house and want to try something different, because you are already a little tired of going out to dinner at a restaurant or going to the cinema to see a movie. You may want to break that routine and find some different activities to have a good time together and even rekindle the flame of passion. If it is still very burning, it will also be very fun to meet new sensations together.

Do you like to meet up to go out for a drink? If it is one of your customs, we recommend that you stay home for once. It may sound a bit boring that two people do not go out for a drink, but we advise you to do so since the games we will propose can be a bit spicy. So grab your favorite drinks, some ice, and a few candles and music to create the perfect atmosphere. We explain Couples drinking games to drink as a couple and spend a sensual, fun, and different night.

Drinking games for couples: the coin

This game for two people at home is very simple and is perfect for warming up. All you need is a coin and a good glass of your favorite drink. Take turns tossing the coin. The one who has to throw it has to try to guess if it will come up heads or tails.

If you get it right, the other will have to have a drink, while if you miss and the side of the coin that you did not choose comes out, you will have to drink. The coin passes into the other person’s hands, who will repeat the toss with the same consequences as explained above. When the coin returns to the hands of the person who started it and failed to predict it again, they will have to have two drinks instead of one. And if he failed again on the third shift, he would have to drink three. You will only stop increasing the number of drinks if you get it right and the other person has to drink, then when they make a mistake again, the count will start again from one drink.

We advise you that you introduce this variation if you want the game to be a little spicier. Every time the person who tosses the coin makes a mistake, they will have to remove a garment and drink the corresponding drinks. They will be the perfect preliminaries for a night of passion.

In this game, to drink as a couple, you will need a handkerchief so that one of the two covers their eyes. Draw lots for who gets to be blind and the other will have to undress. Of course, don’t forget about the drinks.

When everything is ready, the person who does not have their eyes covered will have to place the other’s hand in a place on their body and the person with the tissue over their eyes will have to guess which part of their partner’s body is. , only with touch. If he is right, the naked person will have to have a drink, but if he is wrong, it will be the blindfolded person who will have to drink. We recommend that you change roles every so often to enjoy the experience both of you.

Surely at home, you have some dice, like those you use to play any board game. You will need one of those, in addition to preparing your favorite drink, to enjoy this simple and, at the same time, sensual game.

When you have the dice, take turns rolling. If an even number comes up, the one thrown will have to drink, while if an odd number comes up, they will have to remove a garment. Go alternate turns to make it more fun. A variation that we recommend to increase the temperature and the interaction with your partner? When rolling the odd number on the die, the person who is not rolling will have to choose which item of clothing the person who is rolling the die takes off.

Card drinking games as a couple are a great option to have fun with your boyfriend/girlfriend and, at the same time, get to know each other better. Here are some of the best card drinking games:

The Queen: The player who draws the queen will have to ask the other player a question. The questioned player will have to answer other questions for three minutes. If you forget to do so, you will have to drink.

Aces: When an ace is drawn, all players must drink the contents of their cup one after the other quickly, starting with whoever has drawn the card.

This game is simple, fun, and very fast, so don’t get lost! To start playing, take a deck of cards and mix them well.

He then deals all the cards in the deck between the two players. No one will be able to look at the cards, so keep them face down.

The player who starts (previously chosen) must start by drawing a card from his pile and placing it face up in the center of the table while saying “one.”

The other player must do the same and count “two” and so on. The game’s grace is that this is done with some speed, so it will be more fun.

The game is lost by the player who matches the number he says with the number on the card. That is, if you have to count “five” and just drawcard number 5, you will lose.

You may also like to read, 10 tips for a perfect birthday party

10 tips for a perfect birthday party

Why dinosaur party supplies are anything but prehistoric